Apologies my lovely readers! I definitely have been slacking with this blog. I had planned on updating back in the beginning of February, but for some reason yours truly never finished the post I like to call "Spa Day." It's a pretty long story and I'm still debating whether or not you guys really need to know every single detail of my surprise trip to the spa. So we'll see if I ever finish it! =)

I really wanted to update today though because my most favorite basketball team, the New York Knicks won their game against the Memphis Grizzlies! It was such a great game and I felt like telling you about my (on-again) obsession with them. Haha. Back when I was like 10 years old, my older sister Peejay got me into basketball. She is such a big Knicks fan and being the baby, of course meant following around the only playmate I had, who just happened to be her. I watched almost every game with her and even watched her create her very own Knicks scrapbook with all the newspaper clippings of the players. She's the best I tell ya! She explained the games to me and answered any questions I had about the different calls the referees made and what they meant. She's pretty much the person who taught me about basketball and I'll be forever grateful because it became my number one favorite sport. The Knicks were so awesome back then! Then over the years I lost interest in the team. All the best players either retired or were traded and the new ones were just not as good and entertaining. The team lost its game and I eventually just lost all hope for the Knicks. That's when I moved on to baseball (GO YANKEES!). However, they recently got back and became #6 on the top 8 list of the Eastern Conference and I'm confident they'll go a long way this season! The team has chemistry again and I'm just so excited to see them go into the play-offs! They also have some cute ass players! Well, one in particular. #6 Landry Fields! (Peejay is soo going to kill me for this post!) I forgot how much I love ballers until I saw him! <3 He's the number 3 rookie in the NBA right now! He's so cute! 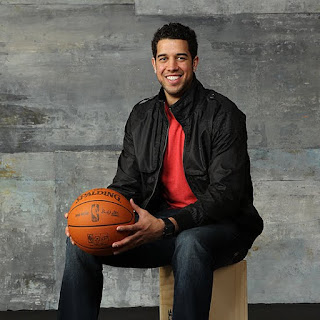 "The hottest rookie in the gaaame!"

Not only is he a good player (& cute!), but he's also so funny! And I just loveee funny guys! Modell's chose him to be one of the athletes to pose as a Modell's employee and sell their jerseys at the store. And I must say the video is hilarious! Here's the video!

I love the Knicks and I love Landry Fields (even though he's 3 years younger, but who cares right?! Haha!)!!