So, after the cousins exchanged gifts, everyone just hung out, ate some more, and caught up with one another. Our family is big and we don't see each other often, so when we have big gatherings like this, we talk and talk and talk. =) We also watched the kids play Just Dance 3 on the Wii. It was pretty cute. Didn't realize how well my nephews can dance! I was going to post a video of my nephew Julian dancing, but the file is taking too long to upload. Oh well. Lyssa also came up to my aunt's house (she's lives a couple of houses down the street) to hang out with the family and exchange gifts with me, of course. This has been our tradition at every Christmas and I love it. This past Christmas was definitely a good one. I had a great time at the game with Peejay and always a great time with my family.

The following day we took Simba to the vet to get his nails did. He just loves going there....yeah I'm totally being sarcastic. Haha. The look he had after his visit was priceless. He definitely looked so happy and free...well that was until this big ass dog started sniffing him as soon as he got out of the exam room and he had the most terrified look. It was the funniest thing ever! I swear, it looked like his heart stopped. I bet he thought the dog was going to eat him or something. Haha. This is how he kinda looked like.... 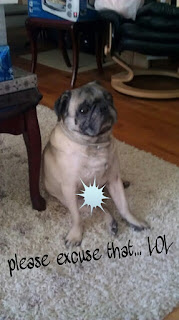 Haha. We then got some of his meds, since he's been scratching his ears non-stop lately and paid for the visit and his medicines. Can I tell you just how much I love coming to that place? The people that work there are absolutely awesome. The receptionists, the assistants, and even the doctors are so friendly and so good with our dog. They make dealing with a squirming dog look so easy and the best thing about the whole visit is that they do not charge us an arm and a leg for his visits. Even his medicines didn't cost as much as I thought it would. At his previous vet, they charged us about $500+ for a visit and one medicine. And I didn't even like doctor! At this current place, we paid like around $230 for a visit and two medicines. It's so crazy how much of a difference that was. So glad we switched!


Anyway, that was pretty much the end of 2011 for me. I worked every single day that last week of December. It's one of the busiest time of the year for us and boy were we busy! The kids were all off from school and it's like everyone came in for their appointments. Haha. By the end of the week I was too tired to do any partying like other people do for New Year's. I just spent New Year's Eve with my family at home (minus my sister and my brother in law), baked a cake with Peejay, and played some Just Dance 3 on Wii. Yes, I bought it and it's actually really fun. It's also great cardio! Haha. I watched the ball drop and went to bed.

The following day, I spent the whole day with my family. My siblings and I + Lyssa just hung out and watched a movie, but the first thing we did was go to church. . It's been a while since I've gone to church consistently and that's definitely something I want to change in my life. I want to find my spirituality. That's actually something that's on my list of things to do before I turn 30 years old. I also decided that I'm going to stick by my list and actually do them this year. Either by myself or with anyone who wants to join me. I know for a fact that I won't get to do everything that's on the list, but I want to be able to do a decent amount. And yes,  I promise to blog about it every time I cross one off my list. Anyway, just being with my family was definitely a great way to start my new year and now I plan to make this year an even better than last year. =)

Well, it's getting pretty late. I need to get to bed. Until next time!

Posted by Phoebe Jan at 1:54 AM No comments:

Wow. Time sure does fly around the holidays.

Sorry for the lack of updates everyone! Especially to my most avid reader...I'm sorry. I know you're super curious to know what I have been up to. So, here you go. =)

I can't believe I've neglected my little blog for about a month now. I might have to split this post into two parts mainly because you might get bored reading a really long and wordy post. Work has been pretty busy, particularly the last week of December. That is usually one of the busiest week of the year for us. Kids are off from school, people are trying to squeeze in to get their braces off before the new year or people are trying to get braces so they can use up their flexible spending. Anyway, I have just been way too tired to blog anything after getting home from work. If I wasn't resting, I was doing some Christmas shopping. I even stopped working out, but that's another story. Haha. I am proud to say that I finished my shopping early again (Thank you online shopping!), but I didn't get to finish my wrapping until 2 days before Christmas. I know it's still pretty good, but I really wanted them done way before then so I could just relax. I hated that certain gifts were delivered later than I expected. I guess I should have ordered them sooner...there's always next year! Gotta be prepared. Haha. Anyway, here's the color theme I had for this Christmas. It was brown, gold, and red! 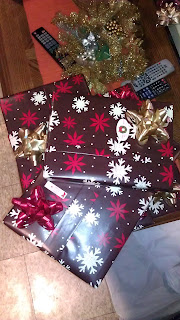 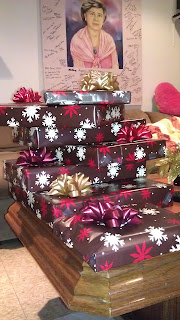 I was going to add some gold ribbons to spice them up a bit, but it was getting late and I was way too tired to add anything else on. Next year I plan to make them better...more professional looking! Haha.

Anywho...a week before Christmas, Peejay and I scored some free tickets on Ticketmaster to the Knicks (Yes, they're back!! Yay!) Scrimmage. It was pretty much a practice session/game against one another that's open to the public. We had some pretty decent seats and I really enjoyed seeing the players back on the court! It definitely hyped me up for future games. 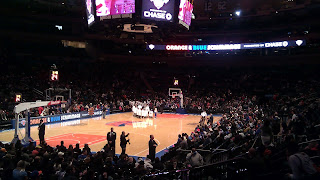 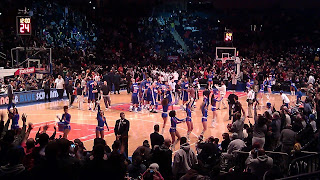 Little did I know that I was going to attend the first game of the season!! Two days after we attended the Scrimmage, Peejay won tickets, AGAIN, to the Knicks game against the Boston Celtics on Z100! I swear she has the best luck when it comes to winning Knicks things! Haha. Til this day, I'm shocked we were the 100th caller and won them! The seats weren't the best though. I was practically sitting next to the ceiling of MSG, but we were thankful that we were able to go and see them beat the Celtics!...and for FREE! Definitely no complaints here. Just being there was good enough for me! Give me shitty seats to any game for free and I'll take it. Haha.

Since the game was on Christmas day, we were a couple of hours late to our annual family Christmas party, which worked out cause we weren't the only people late. Haha. We did our "reversed" raffle. It's $5 per person and we put everyone's name in a bowl. Depending on how many people are in it determines the amount of money the winners will receive. We then draw names one at a time and what happens is if your name is picked, you're out. The first person picked does receive something. For example, my cousin's husband Mike was picked first and he received $10. We just thought it was the fair thing to do. Haha. Then the next names drawn are out until there are 3 names left in the bowl. The cash is then divided for the last 3. Third place received $30, second received $50, and first place got $100. Peejay won third place, my dad won second place, and my cousin Ron won first. We always have a great time when we do this at family functions. After the raffle, the kids opened their presents. They were all so excited and I think most of them liked what we got them. We have mostly boys in our family and little boys are so hard to find presents for! So when I saw their excitement, it made me happy. Then the cousins did our annual Secret Santa and my cousin Macy got me! I asked her weeks before Christmas who she got and she totally lied to me! Haha. She's the greatest though! She got me a spa treatment to our local spa! She just knows me so well. She knows how much I've been wanting to go back and she gets me one awesome gift! Thanks Mamacita!

happy birthday to me!

Hey everyone! I know it's been a while since I last blogged, but I wanted to let you guys know that I am in fact still alive! Haha. Just have been super busy and I promise that a "catch up" post is coming your way soon!

But before I go, I just want to pretty much repeat what I put on Facebook. I want to say thank you to everyone for taking the time to call, text (even though some were super early! haha), and write on my Facebook wall today! Thank you for the lovely surprise visit at work, the food, the cakes and goodies, and the wonderful gifts! A special thanks to my family and my best friends, Lyssa & Sheila for making me feel so loved on this day! Each and everyone of you guys made my 5th anniversary of my 21st birthday a very special one! Haha. I love you all so much! 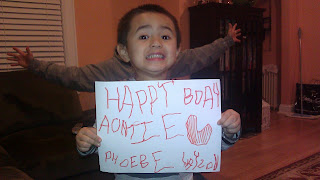