So, I finally got to see my first NFL game yesterday!! I originally wrote down that I wanted to watch a New York Giants game on my Bucket List, but my friend Cory scored some really great tickets to a New York Jets vs. Chicago Bears game. He asked me and some other friends to go and of course I couldn't pass it up!

We left for the stadium pretty early because they wanted to tailgate a little bit before the game. That was also my first time tailgating (I totally should put that on my list and cross it off!!) and it was pretty fun. We didn't go crazy and bring a grill or anything. We just had some beer and just hung out for a bit. After a couple of beers, we decided to go in.

Walking towards the entrances was pretty crazy. I've never felt that kind of energy before and I've been to more than a few Knicks games. The fans were loud, super energetic, and they were chanting all kinds of cheers. It was cool to see just how much spirit these Jets fans had and that was just going into the stadium. By the time we got to our seats (after getting our food and drinks), the game had already started. I have to say...our seats were pretty awesome! It was definitely nice being that close to the field especially since it was my first time watching! Throughout the game, the crowd continued with their cheers and I just couldn't help but chime in. =) It also got a bit chilly during the game, but it was nothing a cup of hot coffee couldn't fix. Now, if you follow football at all, you might know that the Jets aren't the best team in the league. They didn't win that game. It would have been nice if they did, but they didn't. 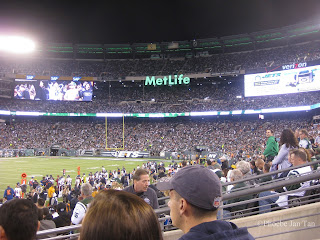 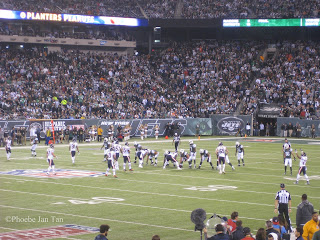 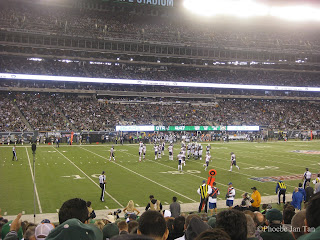 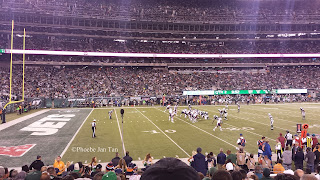 I still had a wonderful time! I definitely want to check out a Giants game next. I have a feeling it's gonna be just as awesome! Who's with me?!