I have to be honest with you all, but I was never a football fan. I have always been and always will be a basketball fan (Goooo KNICKS! They won tonight btw! Went to the game at MSG and had a great time!). I never understood what goes on during a football game and I pretty much thought it was pretty boring just like baseball, but we all know how quickly that changed. I'm a big Yankees fan now! Haha. Well, a couple of weeks ago, I was sitting in my cousin's basement and there was a football game on. I believe it was the Saints and the 49ers playing. Could I tell you what states they're from? Absolutely not. I don't even have a clue how I remembered which teams played that day. Haha. Anyway, I decided to ask my cousin some general questions like how the heck do you even play the game? He explained it to me...took a little while for me to understand since there was math involved haha, but I got it! I understood by the end of the game. The week after, I watched the Giants play against the 49ers with my sister Peejay and my brother in law and man, it was fun and exciting. I felt like I've been missing out all these years. Haha.

Well, since the Giants made it to the Super Bowl, I knew I had to have just a tiny party with whoever wanted to join me. I was beginning to understand the game and I needed to celebrate! I had originally planned on cooking different things. Fancy things. Things that actually weren't the type of food you'd serve at a Super Bowl party, but just ended up ordering some pizza and wings due to time constraints. There's always next year, right? =) Well this is how our mini party turned out... 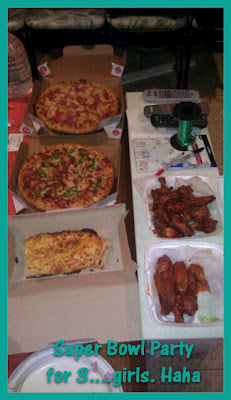 My cousin Macy ended up coming over and watching the game with me and Peejay. We definitely watched the game like girls...we screamed "Go! Go! Go! Go!" every time the Giants had the ball, made mental notes of questions to ask my brother about what each penalty meant and commented about how badly players get tackled, but we sure did eat like guys. Haha! Hey, it was great. I was a nervous wreck during the 4th quarter, though. I didn't think we would score another touchdown, but we did! I freaked out a bit when Bradshaw decided to stop and waste time by sitting down to score! I was like "What the hell is he doing?!" Haha. I definitely had a good time. I didn't think the commercials were all that great, but I did like the M&M's commercial and the Sketchers commercial with the French Bulldog. So freaking cute, I tell ya! That one definitely made me laugh and it's too cute not to share so here it is.

I can't wait until next year! Now, since that's over. Let's focus on more important things like the New York Knicks! Haha =)