So, my last post was on organization and for a while now, I've been meaning to "re-organize" my bedroom. There are plenty of things (mostly clothes) I need to get rid of and make room for the new items I've bought over the past 2 months. Btw...I think I have a slight shopping problem, but what girl doesn't have this exact problem as me? Haha.

Anyway, this week was the perfect week to start my re-organization mission. I actually had 3 days off from work! Do you know how much a person can get done in 3 days?! Unfortunately, I didn't do anything because my aunt and uncle from Chicago are in town and they're staying with us for the week (yeah, great excuse Phoebe). Also, my fat ass decided it's ok to take a break from running and eat a lot while they're around. Haha. Ok, that's really not the real reason why. I totally could have done it even if they are around. It's the 2012 London Olympics' fault! That's all I've been watching for the past week and I just didn't realize how time consuming the damn Olympics really are! That was the first time in a really long time I've spent so much time in front of the television!

Yes, I just love me some Olympics....especially men's swimming. Been such a swim fan since 2006! Thanks to my cousin Aimee! She took my sisters and I to our first swim meet in Long Island, where they hosted the FINA World Cup. I mean how can you not love cute guys in those small, tight Speedos?! Cause I sure do! Haha! That was the year we first saw Michael Phelps swim and instantly became huge fans! Also,we met and hung out, might I add, with Brazil's very own Olympic swimmer, Thiago Pereira! (How we got to hang out with him...well that's a lonnnng story. Haha!) Here are some pictures though...sorry if the quality sucks. I wasn't (and still am not) the best photographer. Plus, I didn't have the best camera at the time. Haha. 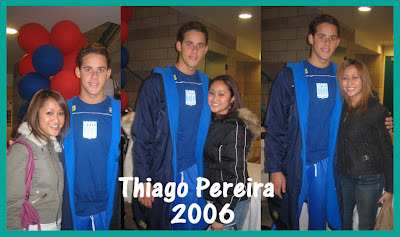 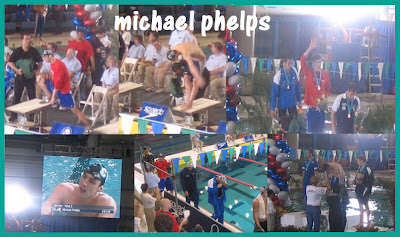 Looking through those old pictures made me really want to watch another swim meet live. It's definitely a different feeling when you're watching them swim in person. It's more intense and exciting! Oh man, that just brought back all these memories! Haha.

Well, I just want to end this post with a thank you. Thank you Summer Olympics for keeping me glued to my television for the last week or so! I got absolutely nothing done in my room! But to be honest, it was all worth it! Some family quality time was one of the few things that you gave me and I'm so thankful that little things like these can bring people together! =)